July weather was awesome. In fact the weather has been great this whole summer so far.
We started to get a few forest fires but just the right amount of rain and the fires are under control.

Will try to keep this in order by week but can't be sure of it.
I know a bunch of photos from last year disappeared. I will try to fix that soon but you know how busy I am and my limited hours available.

January 27 to August 3 we had the Chicago fire fighters. Ed Jantz, Bruce, Mark have all been fishing with me for quite a few years and each have their own personal record pike. Mike Brown and his sons Matt and Brendan were previously uneducated in the "way of the Pike".
Well it didn't take long. Brendan had his first Giant Pike on the line on his 3rd cast.
A giant struck his magnum fire tiger rapala while we fished the sweet spot on virgin spot.  Unfortunately he lost it but the experience galvanized his focus and strengthened his resolve. He didn't stop casting for more than a few minutes the remainder of the week.
He was rewarded on day one with  a number of "nice " Pike in the 30- 38 inch range.
On day two he caught two Huge Pike that would be considered a trophy Pike by any standards.
These two giant pike were caught within  30 minutes and 20 yards of each other
Brendan  also caught a bunch of "nice" Pike and a about 40 walleye. 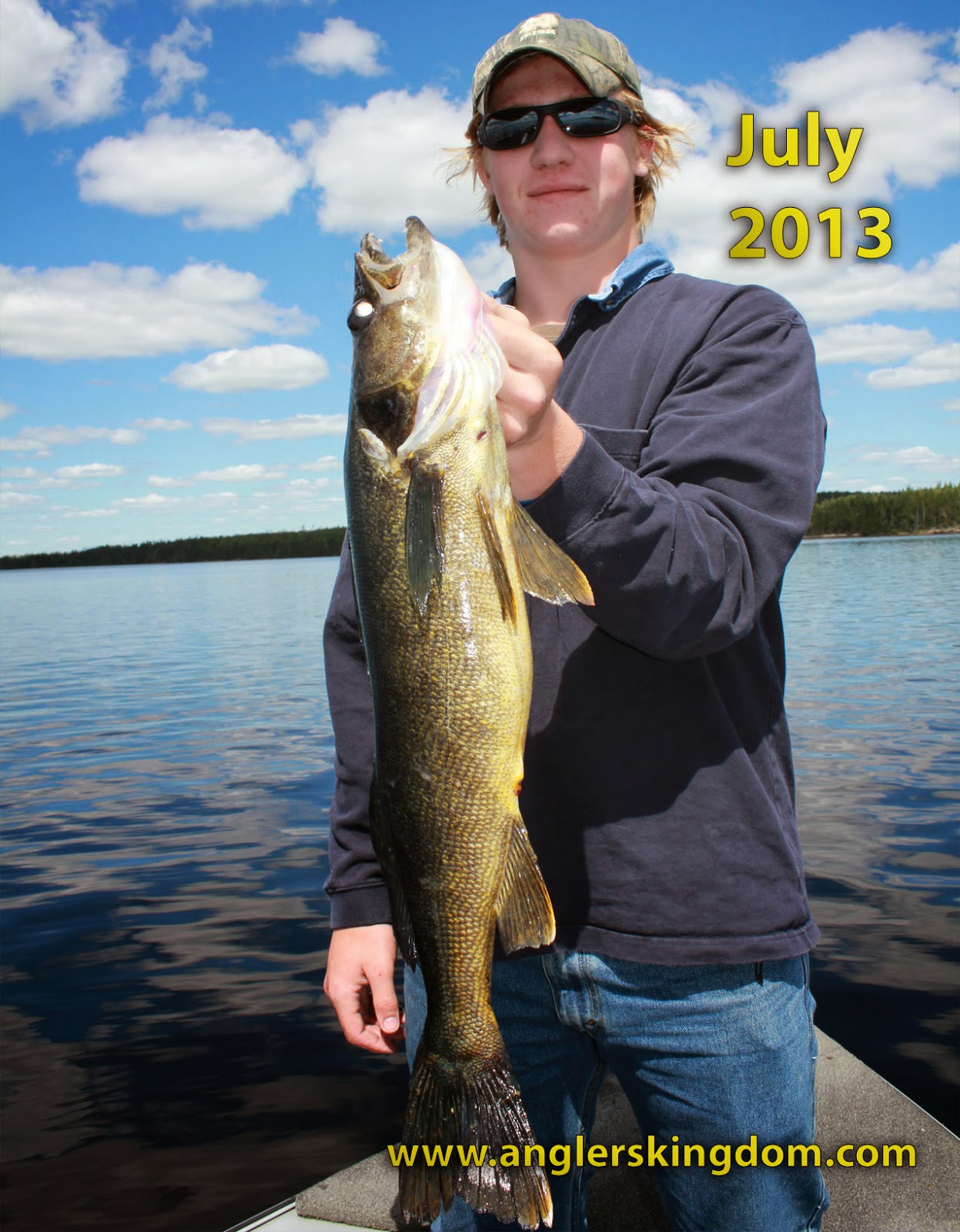 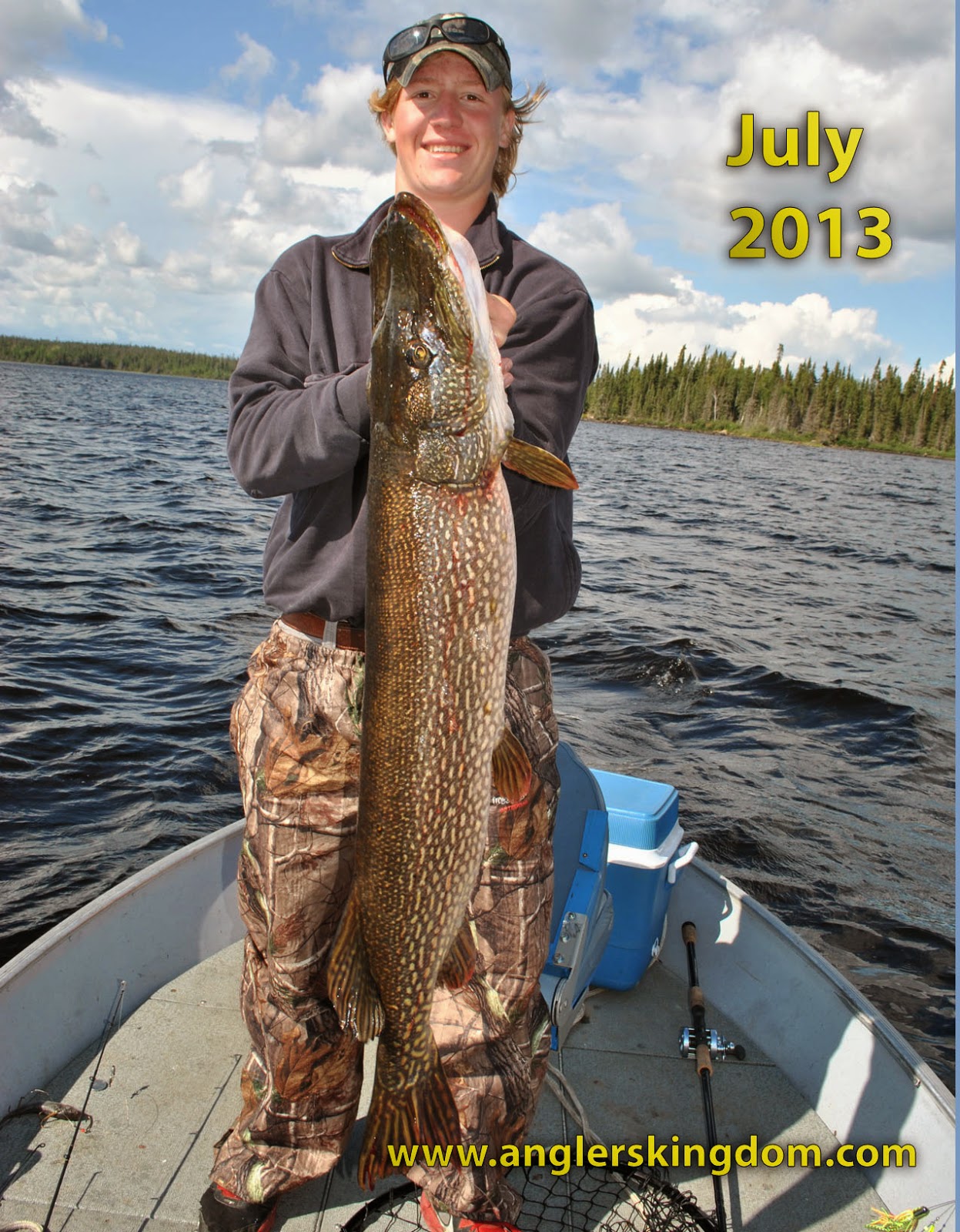 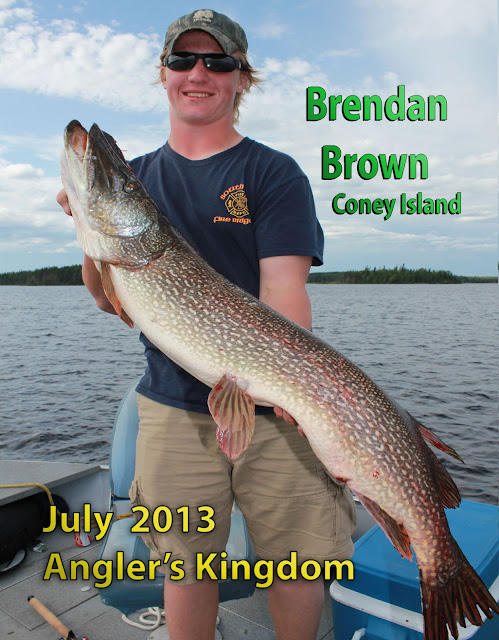 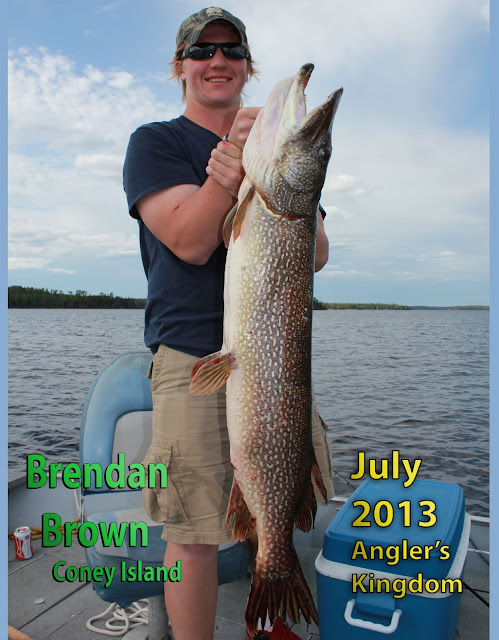 Mark caught a "whole bunch" of nice fat 22-27 inch walleye. "Like catching blue gills" I think he said.
For several hours on Monday and again on Tuesday we couldn't hardly touch bottom catching several hundred nice walleye and several trophies.
Ed and Bruce were toying with a few large specimens but chose not to allow them in the boat.

Jarod Weaver was back at the Kingdom to upgrade his personal Record Pike.
Jarod caught his beauty on a bulldog.
A genuine trophy pike 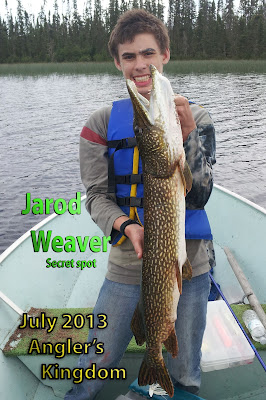 The Walleye Wizard was again performing his magical method of catching world class walleye.
Here are a few samples of his handiwork. 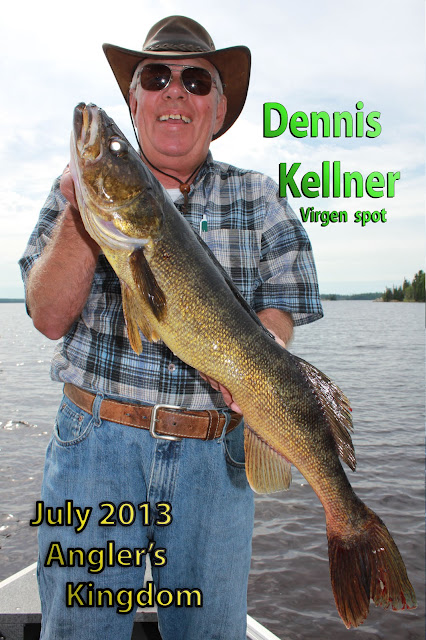 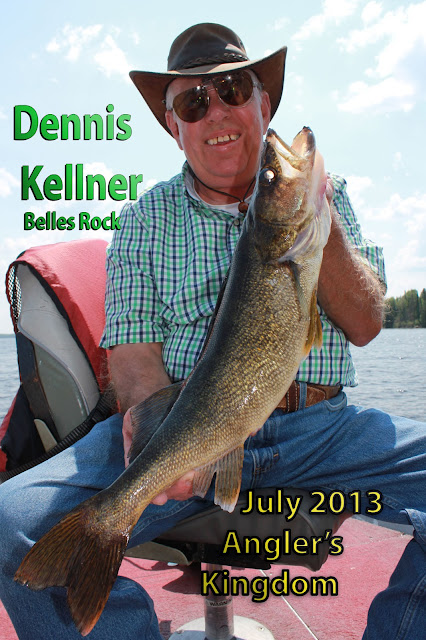 Steve Hryszczuk and his sons Luke and Same were up for another visit and had a great time with a lot of fish including some very big Pike. 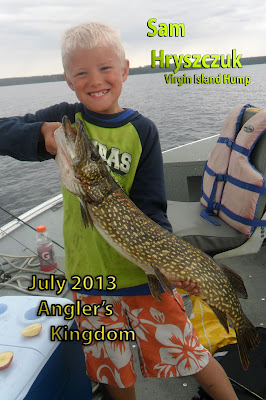 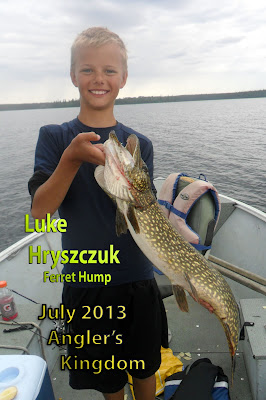 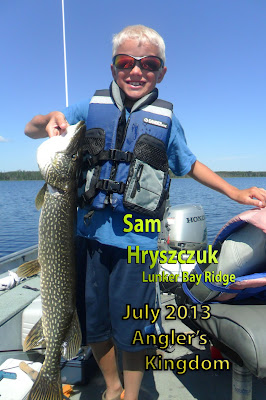 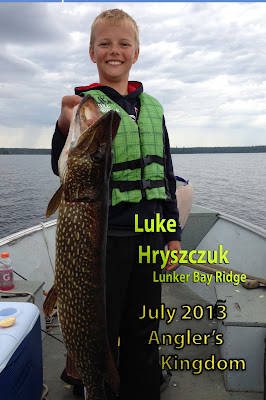 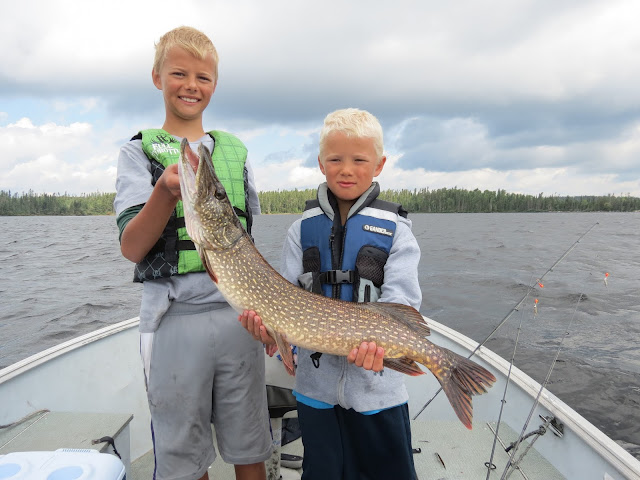 Marcel and Norma Coysman were up for there first visit..
both caught the largest pike and their own personal record Walleye.
Norma caught a Ginormous 30 inch walleye.
sorry didn't get a photo.
but I did get this photo of her 28 incher.
and several others I will get posted asap 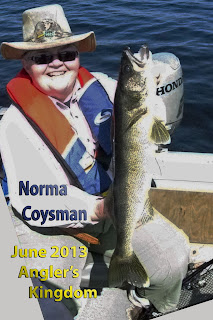 Brody Koehn was up with his family and Jeremy Koehn was our first wheelchair guest.
The whole group had a great time and great fishing.

Bruce and Laura Nash made their 8th visit to Anglers Kingdom and 20 something year fishing with me.

Larry and Marie Johnston returned for the  7th year in a row.
Marie stayed 3 weeks and Larry is staying for ___ more weeks.
Marie of course caught a bigger walleye that Larry with very little effort.

Fran and Barry had a great time and were amazed by their guide Hayden.
I'm hoping they will send in some of the great photos.

Everyone seemed to report the same thing.
They caught More Big Fish this year.
That has to be a good thing.

As for non fishing reports.
We have rebuilt almost all the seats in the fleet.
We added 10 more color /gps sonar units.
we painted several boats and a bunch of other stuff during our mad dash to get open in the spring. 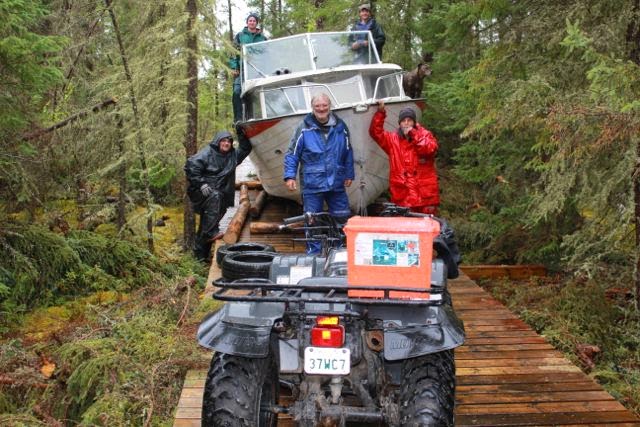 We did transfer the 24 foot passenger boat across the portage.
It took a bit of work but she is now floating comfortably at camp.
I am repowering it with a 130 hp Honda and it will become a great vehicle during inclement weather.
I also bought two more 90 hp hondas to help move our guests quickly during changeover days.

We also continued with the ramp at the portage in a ongoing  project to increase our guests comfort and  reduce their travel time from the landing to camp. My aim is to make the trip into camp quick, comfortable, effortless while maintaining all of it's beauty and appeal.

We also added on to the board walk and made cabin seven and the dining room wheelchair accessable.
Plus wee added and extension on two of the 3 docks. 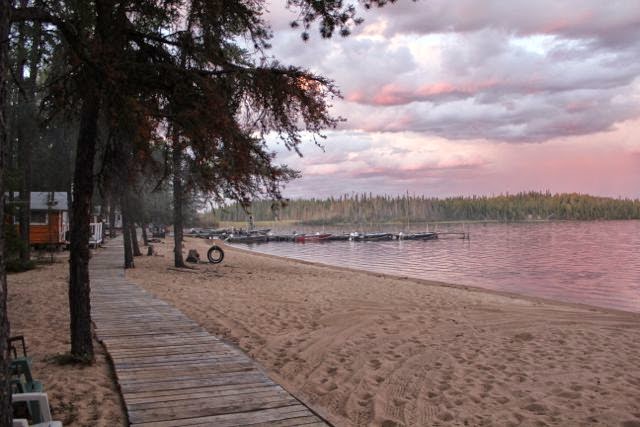 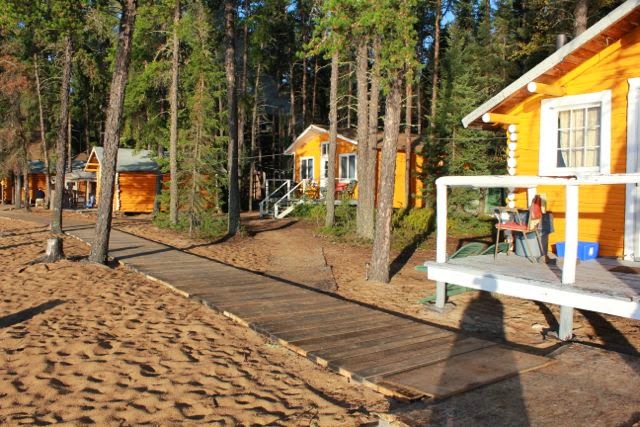 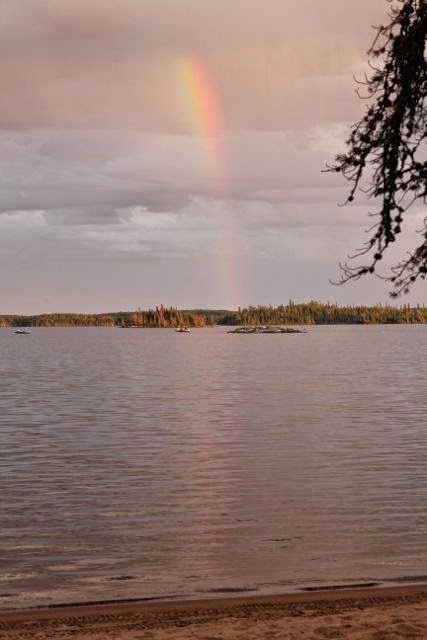 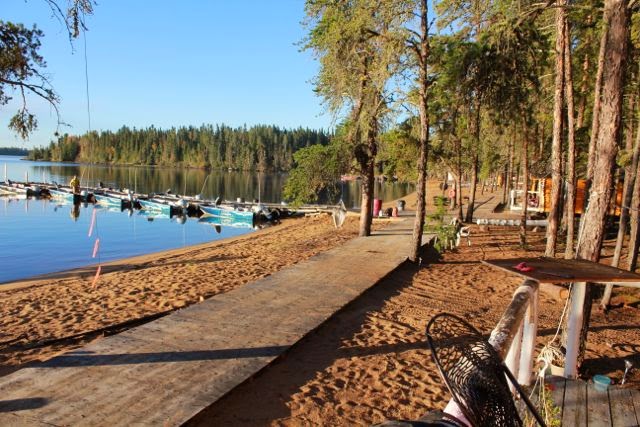