HOLY SMOKES THAT WAS A BUSY MONTH

Dennis Doering with the biggest pike of hie life. ( bigger than Garys).
The fishing was outstanding as usual. 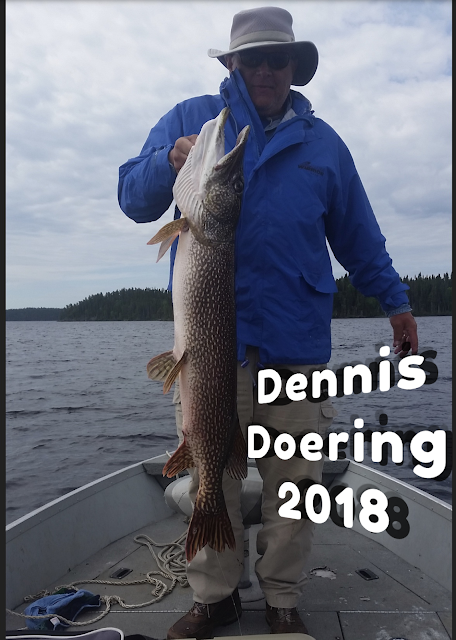 By the time I post this June 16- 23 will have gone by. Jack Beavers and his group were here and they reported catching well over 2000 fish. They caught more big fish this year than any of the 10 years they have been coming. Jack is usually up again in September.

Kevin, just a note of “thank you” for getting the camp ready as best you could for our group. Some of us whined about the water or no hot water, we survived!

Fishing was great this year, especially for large walleye’s, despite the very warm weather and no wind.
The guy’s are already looking forward to next year. Sam had a great time. 1st Time fishing out of a boat. It was a special time for me.

Keep in touch when you have time this summer.
Say “hi” to Deb.
Again, thank Hayden, Bell, Dennis and Eric for all their work
Thanks again
Jack

Great photo thanks for sending it.
I will put it on the website
We installed a third hot water tank at cabin 1/2 and still wouldn’t work.
Finally tonight Hayden found a tiny tiny black button and pushed it.
Away she went.
So maybe finally found the trouble.
I was getting ready to drive to menards in international falls to buy one for them.

Sorry the water wasn’t running properly for you guys.
It SEEMS LIKE WHENEVER YOU HAVE THE MOST WORK TO DO IN THE LEAST TIME MORE STUFF GOES WRONG.

Glad everyone had a good time.
Good to her Sam liked it because we need young people to like fishing.

Will keep in touch
Say hello to everyone.
Thanks again
Kg I will try to begin describing everything about the fire. If I was to write this right after the fire It would be mostly anger. It started at 2 am on May 20th. Fire inspector reports i=the fire started at the two wires coming out of our solar system inverter. The system was not being used at the time. But had worked perfectly for 2 years?? Everything was ready for opening. We had gone thru everything on each boat. Hayden and I cameinto camp late march and had re done everyconnection on each electronic device isn’t eh boats. We had fixed seats, repaired floors, new carpets etc etc. We did more work than any previous year. The boats were READY.  We were talking about putting the boats in the water the next day.  I sure wish that we had. We lost 20 boats and 32 motors from 50 hp to 225 hp. Guests fishing boats and our big work boats. They were not insured for fire. So at the end of it all I will lose about $400,000 worth of boats and 100,000 in other stuff not covered. and an unbelievable amount of work.
We had hauled in way over 4,000 worth of groceries just that evening. Plus all th e propane, gas, other supplies, building materials etc etc. And of course the literally thousand of parts. Plumbing,  electrical, hundreds of parts for the New addition to cabin 2. All of our tools for carpentry, welding, mechanical, well over 30,000 just for tools and parts. The solar system was 20K, our water filter system was 10K We fought the fire from 2 am to 7am with every ounce of energy we had. The MNR fire crew arrived by chopper at about 7am. They helped put out the fire that had burrowed into the ground following roots . At 2pm they found a fire under cabin 3. If it had been missed it would have taken out the rest of the camp. Within a few hours we were rebuilding. We had the water and electricity to this half of the camp by that evening. Four days later we were bringing in boats. We flew some in by chopper.
It was the beginning of a very very long month of intensive hard work. The short version is that we did it. We had 10 boats on the water ready to go in 7 days. We had rebuilt all of the systems and replaced most of the food, propane, gas etc. It was an amazing feet and I am so proud of Hayden. He was truly awesome.  Debra and Gigi were also awesome with all the help they provided. I will get into the details of the ordeal we went thru. For the whole week i felt like I was in the twilight zone. It was unreal how many things went wrong. At one point  mid week Debra asked me “ when are we going to give up. This looks like it is not meant to be.” 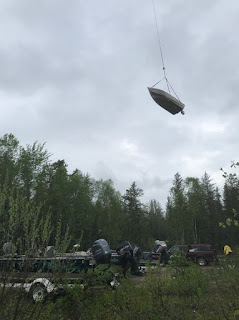 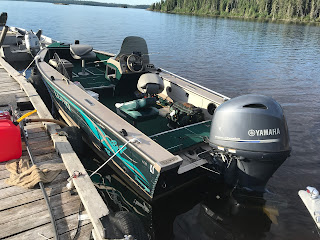 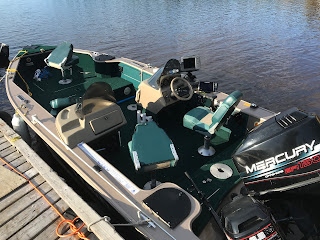 So we decided to rebuild our fleet better than before the fire.

the best fleet of guest boats

of any remote fishing camp in Canada


Back to what we come here for - the fishing 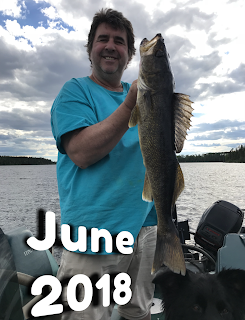 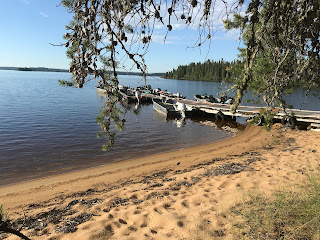 Posted by kgeary at 8:29 AM No comments: