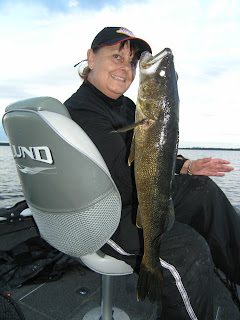 scattered showers in the morning, a few thuder storms running around.

This evening I finally got out with Dennis, Belinda and Seanna

We fished a 14-18 foot flat comingout of 35 feet of water. We caught a bunch of nice eaters.
Seanna had a 40 inch pike right up to the boat but it got off the hook.
that slowed the walleye for about a half hour
then had a 30 minute frenzy with several 20-4, three 26 inch walleye, a 27 and 28 1/2
All in all a pretty good couple of hours.Last wednesday Seanna had a 35 inch pike come out of the water 3 times chasing her walleye.
while it was doing that the other walleye started biting like crazy.
A few minutes later another pike over 40 inches grabbed a different walleye, it let go beside the boat. 5 minutes later a third pike about 33 inches grabbed her walleye.
None held on long enough to land but Seanna was thrilled.
Everytime the pike were busy the walleye fed voraciously.

In the past week I counted 12 different pike attacks on walleye.
The Wolosak group had one they figure went over 50 inches grab a walleye and get right close to the boat. ( last year they had a big pike go after a 27 inch walleye they were netting and ended up in the net) I was releasing Belindas twenty eight (28) inch walleye and had a big pike come up and grab it. 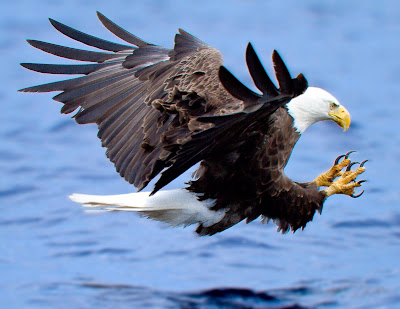