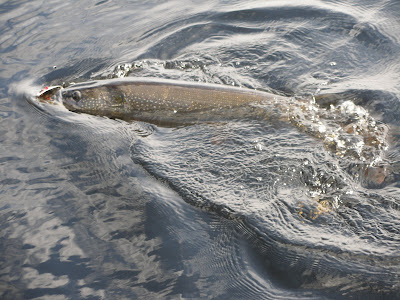 Tom, Jay and Jeff Keefer had pretty good week so far
They caught a 50 incher the first evening they arrived.
the picture doesn't do it justice but she is very very healthy.
Jeff is about 6 foot to give you an idea.
big fat well fed fish.

All of their big pike were caught on a Skittle Pop


So far this week all the big pike have been caught on artificials and all in less than 3 feet of water.
Including a 43 incher off the dock. 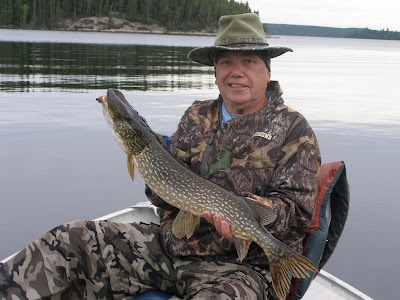 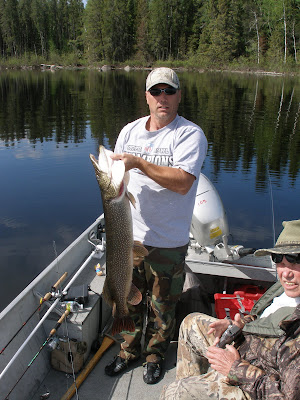 a good mixture of weather.
changing every day.

Everybody is catching lots of walleye and a lot in the 23-36 inch range.
a few 28 inchers have been reported.


Most of the pike this week are being caught in less than 3 feet of water
water temps have been falling down to about 55 by wednesday.
It was actually quite cool on wednesday

The baby ducks have been hatching
That is likey why the topwater baits have been very successful this week.

Most pike have been caught on artificials
In addition to topwater baits the johnson silver minnow has been pretty effective.

Philip Roede
had a good day tuesday with a 39 and 40 inch pike taken off eagle point.
topped it off with a 43 inch Monster pike off the dock after supper

Phil has been using all of the baits his kids bought for him and has caught fish on most of them
wednesday; night he caught a pike off the dock on the little ducky lure his daughter bought.

Captain sombrero, Steve, Bob and Zack had a good time Wednesday morning;
They had a 40 , 39 36 and severl other 30ish pike in middle narrows.
Bob got his personal best a 27inch walleye in Pike alley.


Mike and Herman Kathan
Had a good day Monday with a 40 and 39 inch pike in the back of north bay
Sunday they had a 28 inch walleye.in greens narrows.

Darin Lutz and Joel Dickie
have been "hammering the walleye everywhere we stop"
either I'm a really good fisherman or there are a lot of walleye in this lake
we've been using mostly 1/4 oz orange or chartruese jigs.
tipped with minnows.
the live minnows work well but he salted shiners have an edge
two years ago the gulp alive minnows worked great
this year I've been in spots catching walleye every 30 seconds on salted shiners and thought okay lets try the gulp and they wouldn't even touch it.
The narrows has been unbelievable for 22-25 inch walleye.
J-hook cove has produced hundreds and hundreds of nice eyes but no big ones.
biggest has been 27 but I'm looking for a giant walleye


Ev Anderson and group have been doing well.


Rob and Ron Williams have been doing well.
several 40 ish pike
Posted by Kevin Geary at 10:39 AM