THE ANNUAL SUCKER SPAWN, MORE FUN THAN A BARREL OF FISH 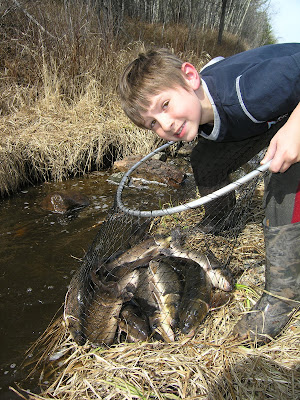 Hayden and Seanna ( and Dad) were out enjoying the annual sucker run. This has become something of a tradition. The first year we took them Hayden was 2.
The rapids was chalk full and the suckers were ripe.
You could almost hear the Pike salavating down at the mouth of the creek.
This is prime time for pike to be feeding on suckers. 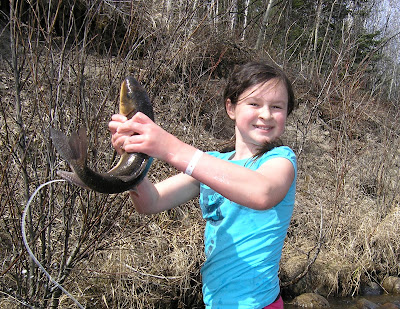 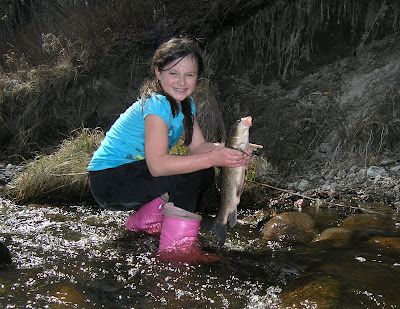 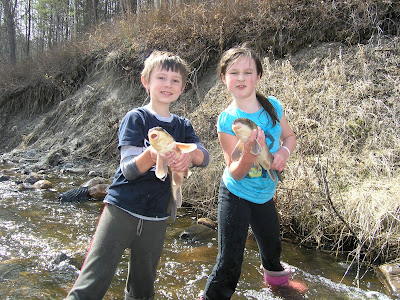 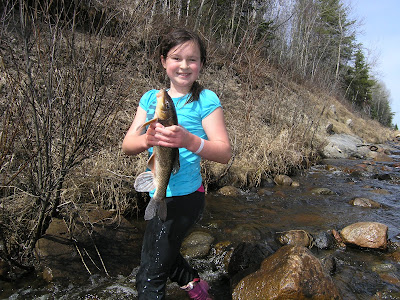 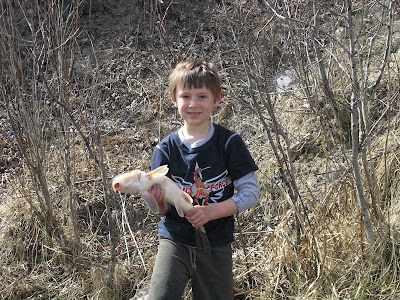 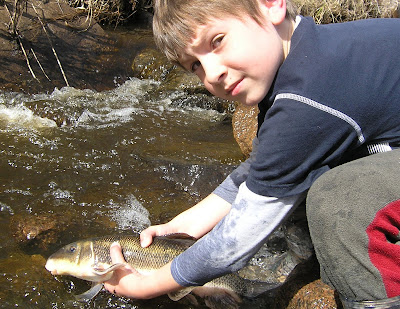 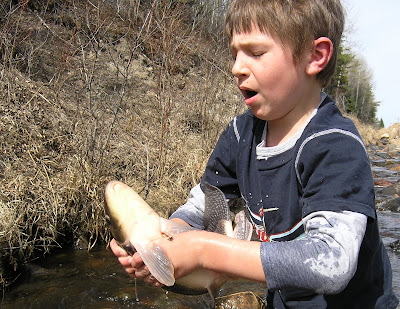 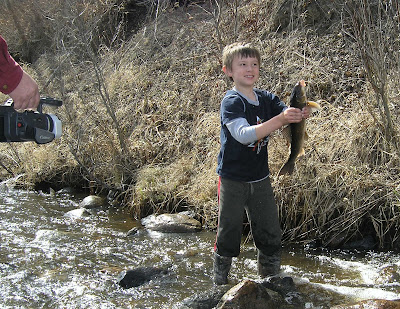 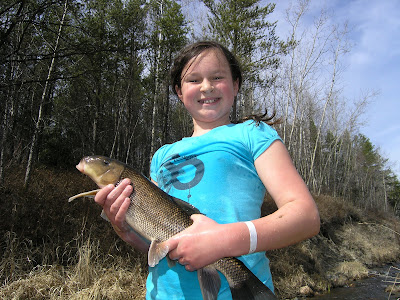 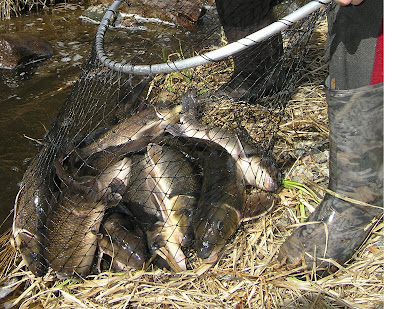 Posted by Kevin Geary at 2:43 PM No comments: 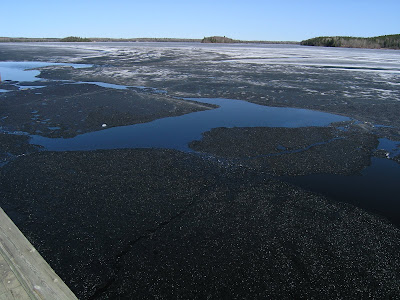 Anybody thinking of early ice out pike now is the time
we find ourselves with an extra 3 weeks of fishing.
After the late ice out in 2008 and 2009 people have been nervous to book May 15 which is the walleye opener this year.
However with the early ice out we now have 3 weeks of avails for those of you who can get away on short notice. 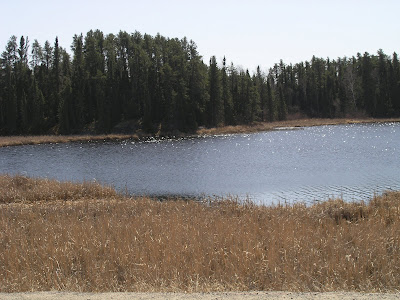 FROM APRIL 25 TO MAY 14 COME ON UP AN ENJOY "SPRING" FISHING WHILE IT IS STILL "SPRING" FISHING.
I'll be doing some pike fishing even if it is on my own. So I'll be posting some photos for you to enjoy. 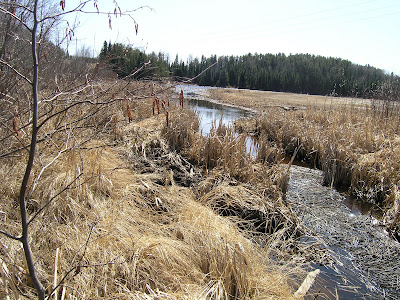 Posted by Kevin Geary at 9:13 AM No comments:

report from a few of our cherished guests 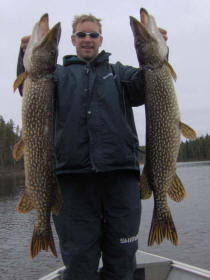 This report is a few years old however it got me to thinking about the effects of a late ice out versus this years early ice out and I thought people would enjoy it.

Originally we were scheduled for a 10 day stay at Angler’s Kingdom, from Wed. May 14, 2008 to Saturday May 24, 2008, however since mother nature was not co-operating the ice was still on the lake and we could not get into camp until Friday afternoon May 16.

We got stuck in the ice several times, but have to thank Robbie and Willy for getting us to camp safely. (see shots of the ice). The weather was very cold and Saturday had everything from rain to hail to ice pellets with a strong north wind. The lake was still frozen and we could only get out fishing around the first corner from camp. By evening the wind had shifted and that part of the lake was again blocked off with ice.

Sunday Mike and Arnie were able to get out to the bay around 3 Sisters, where Mike caught the first pike of the trip, a 28 incher. The first few days, because of the ice, one had to really work for the fish. They still managed to get over 20 pike, with a couple of 30-32 inchers.

Once the lake opened up from the ice, the fishing also started picking up. We took Monica out Wednesday morning, and with her arthritic sidearm cast of maybe 15 feet, she managed to catch 4 pike on her first 5 casts. From then on the fishing just kept improving as the water temperature rose.

Thursday was a very successfull day with Mike catching back to back casts of 36” and 38”. Arnie had the big fish of the day at 41”. During the day Mike netted a 40” and Arnie another beauty at 39”. They had several more in the 30’s that day. In the evening Monica and Mike went out for an hour after dinner and caught 7 walleye and 2 pike. Friday was exciting for Mike and Arnie as they had a double header on their first cast. Mike’s was 36” and Arnie’s 38”. With the adrenaline pumping, the action really heated up and the fish kept biting. They ended up with a couple more reaching 40” and many in the 20’s and 30’s.

In total for the week we got over 60 pike, as well as about 15 walleye, which wasn’t bad considering the horrible ice and weather conditions at the start of the week. 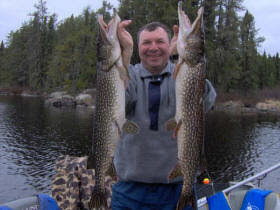 A great time was had by all, including Montana,(golden retriever) who even went for a couple of swims right after ice-out in very frigid water!

All the staff at the camp made us feel very welcome and were extremely helpful with any little concerns we had.

Thanks everyone for a great week!

Monica, Arnie, Mike and Montana
Posted by Kevin Geary at 9:01 AM No comments:

It looks like the ice will be out by April 25 maybe even before.
I don't have anyone booked until the walleye opener on May 15
and not that many even that week
people were scared of May 15 after last weeks late ice out.
we will be in setting up camp as soon as we can get in by boat.
most years we go in and stay over break up but that won't be necessary this year.

SO IF ANYONE WANTS TO COME UP FOR ICE OUT PIKE AND CAN GET AWAY ON SHORT NOTICE THIS IS A GREAT OPPORTUNITY.
YOU WILL HAVE THE LAKE PRETTY MUCH TO YOURSELVES.
AND AS A BONUS I'LL GIVE YOU 25% OFF.
THIS IS AN OPPORTUNITY THAT DOESN'T COME AROUND OFTEN SO IF YOU CAN TAKE IT.

WHILE I'M TALKING ABOUT IT I ALSO HAVE SOME AVAILS THE FIRST WEEK OF JULY THAT I'M SELLING AT 25% OFF.
Posted by Kevin Geary at 9:39 PM No comments: 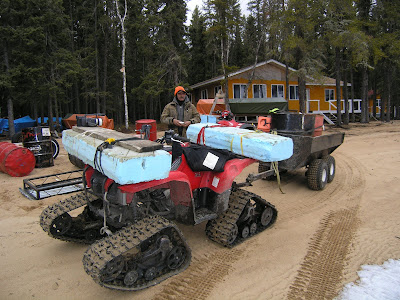 We hauled a thousand gallons of gas to camp on Wednesday April 7. We used atvs with a trailer to get thru the trail and a sleigh and trailer across the ice. Total weight of each load about 2500 lbs. We drilled some test holes and the ice was still over a foot thick, more in some places. It was below freezing all day so minimal danger. I wouldn’t recommend doing this sort of thing. However I’ve had many years of experience and felt it was safe.

We saw a few Caribou and a couple of wolves.
It’s a beautiful time of year

It was so quiet at camp, no win 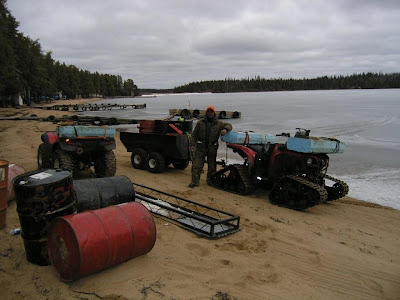 d I heard a sound turns out it was a gas drum sucking air from a loose cap about 40 yards away.
I’m going up the road to get the boats and motors serviced and ready in the river and above the portage.
I’m guessing we will be going to camp by boat by April 25.
I will keep you updated as things progress.

A NOTE FROM PAST GUEST AND FRIENDS CHRIS LINDSAY AND FAMILY.

Posted by Kevin Geary at 7:53 AM No comments: