So far the walleye seem to be in all the typical spots.
Definitely ahead of past years but just think of what the fishing would be like a few weeks ahead and you won't have any problem. The Dragon flies came out Wednesday, the Tiger Swallowtail Butterflies (Yellow butterfly for short) are out.
So that means????___that the shiners will spawn in a few days.
Which means???____that the pike and walleye will be in the shallow reeds near creek mouths.
Have fun.
Any black flies will be quickly taken care of by the dragon flies.
Of course there are almost zero mosquitoes here on the island because it is all sand so there is no standing water which equals no mosquittoes. yahoo!!!

RON AND DAN CONTINUE TO HAMMER THEM
Greens narrows, Eagle nest and all over North bay are loaded with 24 -26 inch walleye in 3-10 feet of water. Of course there are plenty of littles one as well.
Thursday afternoon Ron landed a beautiful 40 inch pike, which he pulled out of the edge of the reed line.
Then in the evening Ron got a nice 38 inch pike.
Carl had a HUGE walleye follow his rapala just like a Pike he figures it was well over 30 inches.
The guys continue to catch lots of walleye right close to camp. 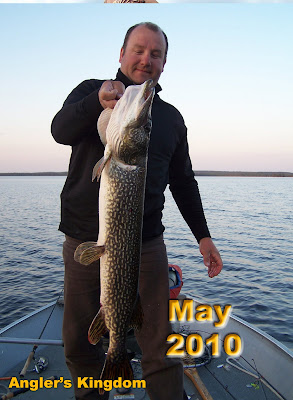 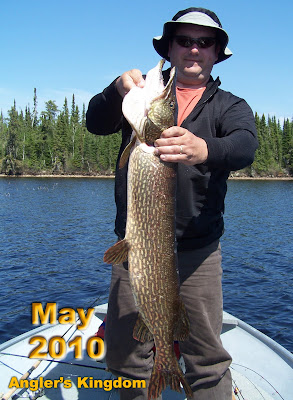 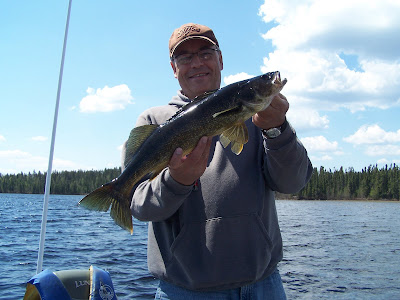 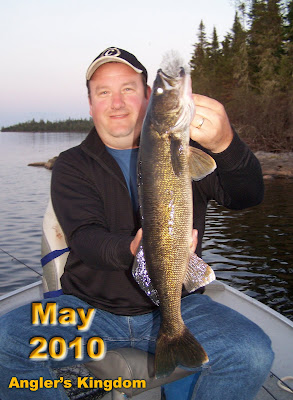 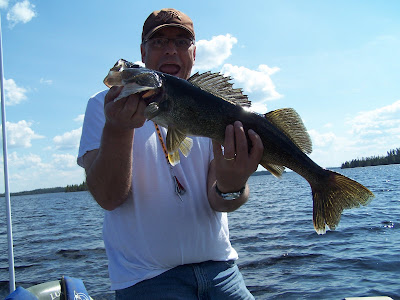 DIXIE CATCHES HER LARGEST PIKE EVER.
Dixie Moore caught a 43 inch Pike, her largest pike ever.
I wish we had it on video from the stories they told and the excitement still bubbling over when they returned for dinner I'm sure the video would have been fun to watch.
There were several good comments, apparently the fun started when they went for the net and realized it was hanging nicely in the cabin and then something about throwing the ___ needle nose pliers overboard. Then there was all that blood on the floor of the boat (and it wasn't the fishes).
See that great smile in the picture? It was still there when they left camp (without their rod case) and will most likely still be there when Dixie gets back to Iowa.
I wouldn't be surprised if she sends that photo to the nice lady at the DesMoines Register. 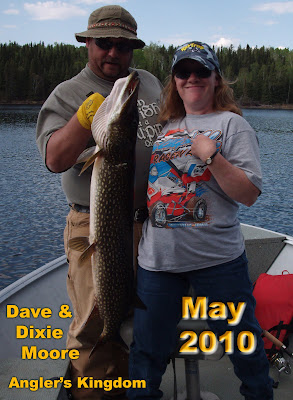 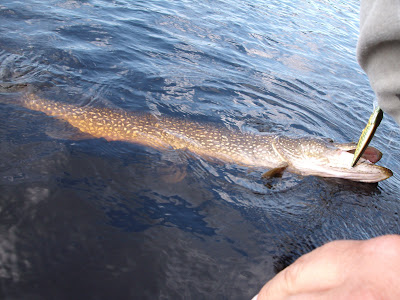 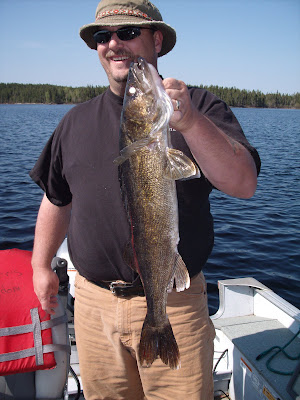 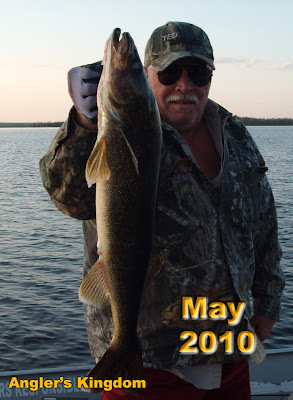 Cal Wicklander has been fishing Canada for 30 years and was amazed by the number of big walleye. His comment " where I used to fish I caught hundreds of 15 inch walleye. At Anglers Kingdom I can't remember catching ONE that small., What a walleye lake".
Posted by Kevin Geary at 6:09 PM