I was pretty sure Dave and Dixie liked Anglers Kingdom when they decided to stay for an extra week, but this letter from them confrims it. 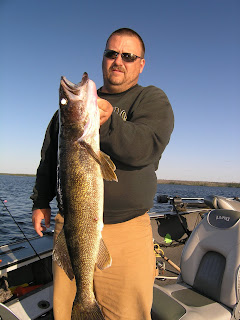 We love the North Country.
On July 9th, 09 my family and I left our home in Mitchellville, Iowa, and headed North to Northern Ontario. I had been to Canada several times before but my family had never been there before. So we ended up leaving Iowa earlier than we needed, because I talked to them so much about how beautiful the country was and how good the fishing was.
On the way up we spent some time in the little towns shopping for trinkets and souvenirs and looking at and enjoying the countryside and thick forest(the Bush). I myself had never been this far North and was excited.
On July 11th, we arrived at the landing for Anglers Kingdom. We showed up at about 12:15. and had just missed the boat going to camp so we ended up waiting for a while until the boat could get back to pick us up. Once the boat got back to us we loaded up our gear in the boat and then headed up the river for about 25 minutes. While doing so I could see the excitement and the awe in my wife and my 10 year old sons eyes.


After going up the river we came to a dock where we had to portage our equipment about sixty yards. This wasn’t bad because the camp has a four wheeler with a pull behind cart to transfer the gear to the other side. Once we got the gear over the portage and into the next boat we were off again up another little bit of river into the lake. It was windy that day and the lake was rough and I do mean rough. But the boats are good sized (18 ft with 50 horse), and handled it well. The dock help was very
experienced and also transported my family and gear safely to the lodge.
Once we got to the lodge, The lodge hands helped us carry our gear to the cabin. The lodge was rustic and set on a sandy beach Island. It has indoor plumbing (shower & toilet) and electric 24 hours a day which was a switch for me. The lodge help also came in and cleaned our cabin daily.
Once we got settled in we met up with the owner of the lodge Kevin Geary. Who mapped out the lake for us. He told us where to fish, what to look for and what to fish with. Like what color worked best and what kind of bait to use. And believe me people your gonna say to him well what about this bait or fishing a certain way. But he will tell you what works best for that lake. We did not go out fishing that day because the lake was so rough.
The next day we hired a guide to go out with us so we could get on the fish. At 7:30 in the morning our guide came to our cabin and said he would not be guiding us that day because Kevin Geary had decided to take us out himself. So about 9:00 am we got started out on the lake. I wanted to get started earlier but Kevin had things to do to keep the lodge running smoothly. Kevin taught me a lesson that day, that you don't have to get on the lake early to catch fish at Nungesser Lake, you just have to get out. The lake is that good. At about 9:20am we got to our first spot immediately we were hooking up walleye's anywhere from 1 ½ pounds to 6 ½ pounds. I would say in two and half hours the four of us caught 60 walleye's or better. It seemed like every minute or two someone was catching a fish. I figured this was like other lodges I had been too in Canada where the guides would take there guest to a good spot and that is where they
would catch the majority of there fish on the whole trip. 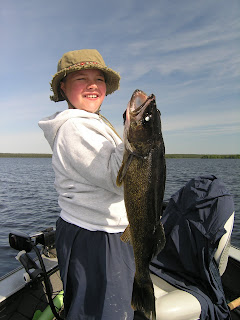 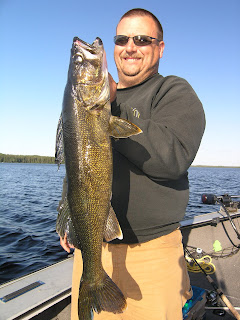 Not so at this lodge, we left that spot and went to another and caught 20 to 25 more fish, then we left that spot and went to another, then another, and another. Catching fish at each spot. I soon realized, that in all of the ten lakes that I had
been on in Canada, that this one was by far the best.
The following day we went out with Kevin again. We caught more than our limit in the first hour and were throwing fish back. Then we met up with folks from other cabins at our lodge and shared a shore lunch. Delicious. We ate every fish we hd in the live well. After shore lunch was over and it was all cleaned up we were back out on the lake at yet another spot and catching walleye's like crazy. We had our limit in an hour.
We also caught Northern Pike, every thing from 2 lbs. to 18-20 lbs. probably 30 pike all together. We released all the pike we caught but took a lot of pictures.
The fishing was not the only thing that was great about this trip. We seen an abundance of wildlife. We saw bear, lynx, fox, caribou, moose, bald eagles and loons.
Another great thing about this lodge is the people that own it. Kevin and Deb Geary. They are outstanding people. Awesome to be around. They do everything they can to make you feel welcome and to help you out in every way they can. They both have excellent personalities. Besides the lodge they have a commercial laundry business, a snow removal business, and Deb is the principal at a school and was also the Chief of the fire department.
Their kids, Hayden and Seanna are awesome. Hayden will take you out in the boat and take you fishing himself. He'll take you where the fish are and get you catching fish (and the cool part about that is he is only 6 years old). Awesome family, I can't say enough about them.
Any way I could write for ever about how great the trip was- in reality I just can't wait to get back to Anglers Kingdom, to enjoy the excellent fishing and the great people. 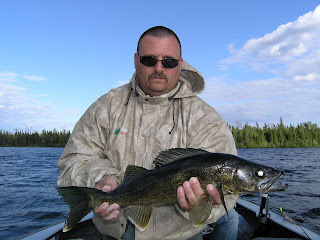