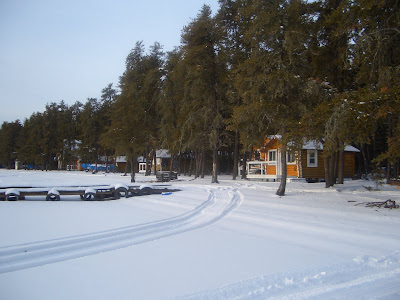 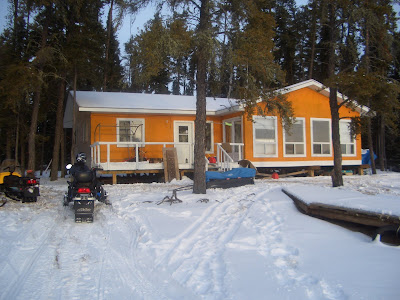 Went out to camp mostly to see if all was well.
Had Mike, Belinda and Hayden with me.
Lots of ice over 30 inches.
Got to camp just before dark, got the generator running etc and spent the night watching movies.
had a nice breakfast and headed out.
went just around the corner from camp and immediatly saw two black wolves had a caribou down. (as it turned out it had literally just happended) Got a few nice pics of the wolves.
This is a Woodland Caribou and a very big one for a Woodland.
When you see hunting shows you see either the Barren Ground , Alaska/Yukon or the Quebec/Labrador.
There are not many places where you see the Woodland and Nungesser has more than anywhere I've ever traveled. Anyway it was a unique experience, not many 7 year olds have witnessed anything like that. Not everyone appreciates these types of pictures but this is Nature in its truist form. We all have sympathy for the Caribou but can also appreciate that the wolves want to survive as well.

We followed the tracks down the lake. One wolf followed in the caribous tracks and the other stayed to the side herding the Caribou. They pushed that Caribou for at least 6 miles down the lake that we know of. They went right by the front of camp
Had we been looking we would have seen them go by. 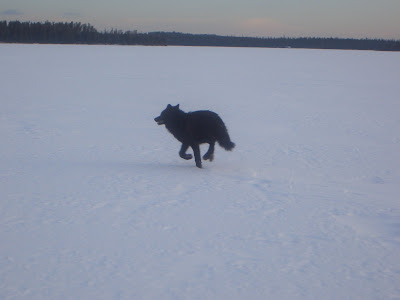 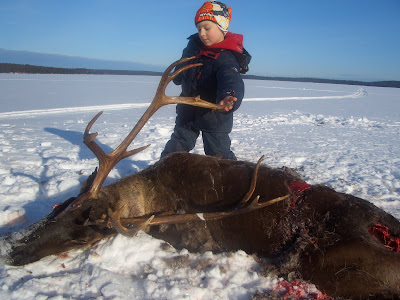 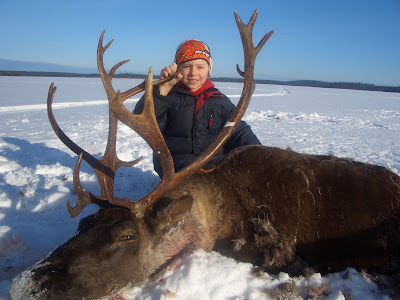 Did a little fishing, caught some pike and walleye. Mosti interesting
was some nice whitefish, spawned out of course as they spawn in the fall.
Lots of ice - over 30 inches and very little snow- less than 6 inches.
The weather was awesome and going to be even better the next few days.
will be ABOVE freezing, which is unheard of for us this time of year. 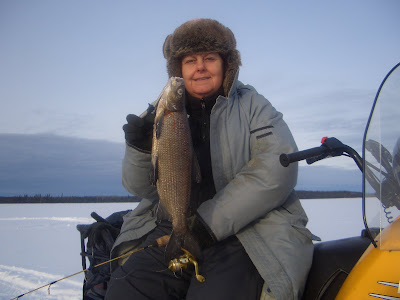 This morning I walked about 75 yards from the cabin to the back side of the island and Hayden used the binochulars. The two black wolves had been joined by 2 grey wolves and a 5th one kind of mottled. It was obvious the other 3 were not invited or welcome. lots of fighting etc. I used a stick and balanced against a tree and was able to get some pretty good video without too much camera shake. I'll load that asap. 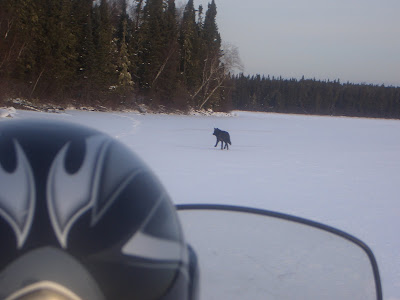 Here is what was left after less than 24 hours. 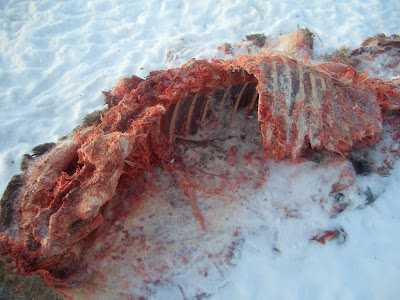 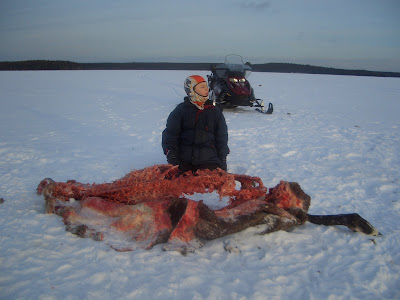