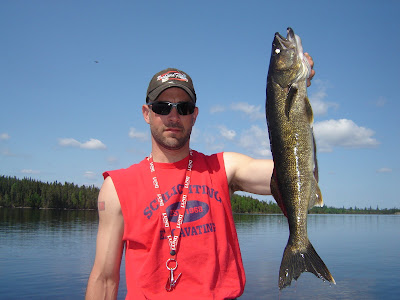 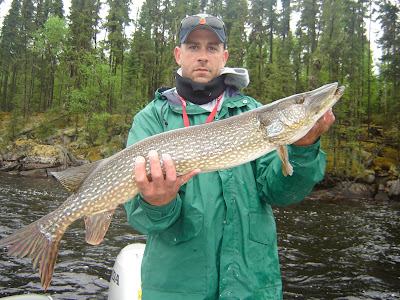 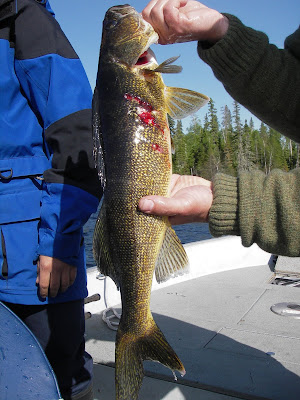 June 1, 2010. Overcast near the virgin islands. Andy using a spinner to haul in this pike

As Justin was reeling in this walleye, A huge northern came up near the surface and took a swipe at it. It could of been a two for one. 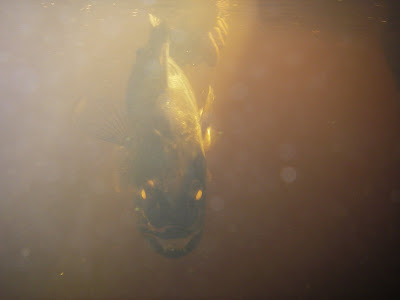 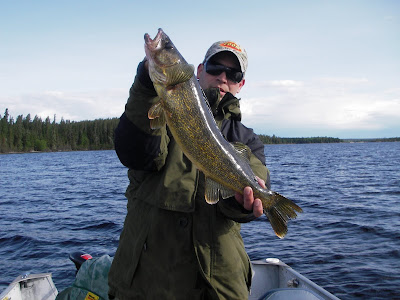 Took an hour to take the kids fishing
It's almost getting old hat for them and they expect to catch big fish.
They got these two off of eagle nest.

We spent a few minutes in Greens Narrows and had an eagle come down for a snack. Then a 50 inche pike take walleye from us twice. We went back to camp and returned with some suckers. caught a 26,27,28 inch walleye consecutively, then had to go to get the kids back for school


We had the big cold front Thursday thru Monday so it wasn't looking great for the folks this week. The rain has brought the water up about 6inches.
Fishing was good Saturday and Sunday. Monday was a bit slower.
It was Sunny Tuesday thru Friday.
Wednesday with a strong west wind was non stop action from everyone I talked to.
Dead calm all day - Slower Thursday afternoon
Not a lot of big pike this week but that is expected after a cold front.
It seems like the fish locations are starting to "normalize"
The fish are for the most part in the same areas they are each year at this time.
The majority haven't made it out to the mid lake humps.
It almost seems like that cold front stopped them from migrating.
The good news is that they are hungry and concentrated.

On Wednesday morning the were on a tear in 10 -12 feet by afternoon they were being hammered in 5-6 feet of water and later we in 10-14 feet.
All the usual suspects in all the usual places.
Its business as usual for the Walleye of Nungesser lake.


The Caribou have started moving, have had about a dozen sighting this week.
Have a nice videio clip of one right near camp and missed a golden opportunity because I didn't have a camera. Had a Cow and her calf swimming between two of the "virgin islands" 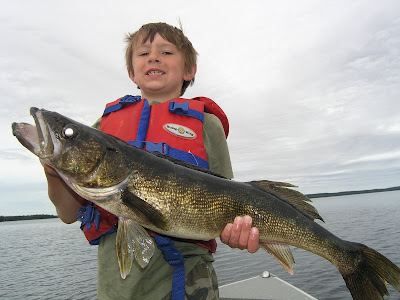 Andy Buffalo from Rockfordfighing.com and his group have been hammering big walleye pretty much everywhere they have fished this week.

Will post some nice photos and good video asap

One comment that stands out this week was something to the affect that "I'm 70 years old and I've been fishing Canada for most of my life and I've never fished a camp as good as this, the lake is outstanding, the equipment is excellent, the staff are friendly. I can't say enough."

It even made me stop and listen. I get so busy with all the stuff it takes to make this place run and it is very gratifying to hear something like that.
I believe we have a good staff in place this year. and they will continue to develop as the summer goes along. 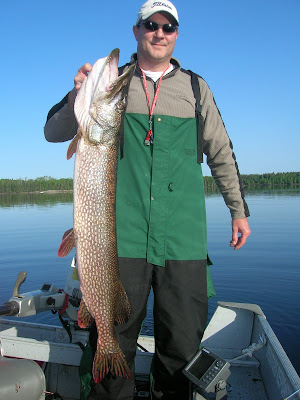 Kevin,
Here are some pictures of the 45" Northern Pike Nate caught last Thursday morning. The 19" walleye is what he decided to latch on to. They netted them both. Great fishing trip!


Bret, Ron and Wade Hodne and the guys from Iowa were back again for the fifth year in a row.
(they will be back up July 24th) 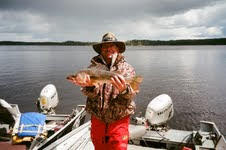 They caught lots of big walleye.

Bret was saying that jigs were catching more big walleye and spinner rigs more numbers.
Worms worked well so did shiners
"we caught fish everywhere we fished, as usual"
have a few pics to post
hopefully Bret will send more.

John Rhinas and Ken have done very well on the walleye, no big pike yet.
HERE IS AN EMAIL FROM JOHN
Kevin,
We had a great time. On Friday alone, I caught 6 walleyes on flies on a fly rod, 23" largest. Ken Nickel caught ( 2 ) 34" northerns on small minnows, with great fights on light tackle and we caught more walleyes and small pike in the afternoon.
We had great fishing, and saw 3 black bears, 2 moose - one in velvet, a porcupine and a female caribou along the way and during our week there.
See attached pics. We will be back. Shore lunch was fun. We will be doing more flyfishing too. 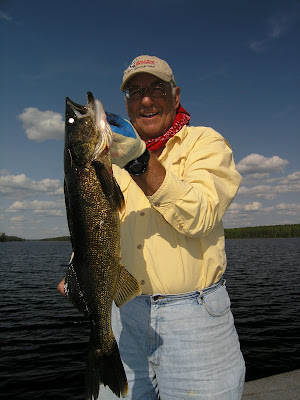 Terry Bedard and his group have returned and they have had excellent fishing. lots of big walleye. Should have plenty of pics to post.


I will be getting details and photos from everyone and hope to have them on here by sat pm.
Posted by Kevin Geary at 10:22 PM