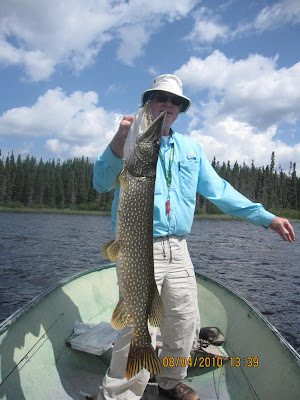 WHEN PETE LEONOVITZ BOOKED THEIR 2ND TRIP FOR 2010 (and 5th total) PETE NOTED
"I TOLD MY DAD A 2ND TRIP TO CANADA IN THE SAME YEAR WAS LIKING ADDING AN EXTRA YEAR TO OUR LIVES"
So true Pete, so true.

8/2
Scattered clouds throughout the day. Slight hail storm that lasted about 20 minutes near the east side of the lake towards big bay. Slight winds from the north. Water temperature at 66 F.

Peter and john from cabin 3 got caught in the storm, but managed to slide in to shore near the Virgin Islands while it passed. They had a slow day, “we caught about 10 walleye in one spot within 10 minutes. We should of stayed.” said Peter, then they mainly fished for pike with no success. Hopefully they have better luck tomorrow.

Mike and his family also had a rather slow day, catching about 20 walleye and a few pike. They fished out of north bay.

The Leonovicz group had a better day today fishing out of the sand flats. They had several pike come up to the surface and take swipes at walleye they had on the line. They brought in about
57. Including this Monster Pike caught by Peter Sr.
Posted by Kevin Geary at 6:35 PM