fishing was kinda slow
Daryl Deno group arrived today, fished 4 hours and caught about 65 walleye
Donny Nemer and the boys arrived today, did about the same.

Rod friese group caughts "lots" of walleye including a 28incher.
Peter Yii group got a 39 inch pike - plenty of walleye.


I went out with Dennis for a few hours
took a while but finally anchored near a 6-7 foot rock pile right where it dropped from 13 feet to 16 feet and then flattened out at 16 for quite a ways.
saw quite a few on the graph so sat on top of them and baisically coerced them into biting.
at first we had to leave our bait perfectly motionless about 3 inches off bottom.
after half an hour we had created our own little feeding frenzy and they were hitting a foot or so off bottom.
I saw a big pike on the graph and it stayed under the boat for a good 5 minutes.
I was just radioing Donnys boat to see if they had some suckers when a 48 -49 inch pike grabbed a walleye as I brought it up.
It was right at the boat and her back was out of the water so I got a good look at her.
Unfortunately the hook fell out of the walleye
oh well -would have made a nice photo.
everything shut down so we went in for supper.

Sunday June 27
Strong North wind and rainy
very few guest even went out.
Saw a whitetail deer crossing the cut beside camp
that is the first white tail we've seen here
Have seen several in the river the past few years.
and actually quite a few this year.

Monday june 28
Dennis fished with Dave and Brad Josephson
They caught over 60 walleye in North Bay most off ealge nest and some off the peninsula.
"That reminds me of a few years ago" said Dennis ( AND HIS EYES KIND OF GLAZED OVER) ( NOT SINISTER LIKE)
"I had some folks with me and we fished the Peninsula and had over 80 walleyes before lunch "
FOLKS I HAVE TO EXPLAIN TO YOU HOW SIGNIFICANT THAT IS
DENNIS SELDOM LEAVES THE DOCK BEFORE 10AM
DENNIS ACTUALLY LIVES BY MY SLOGAN OF "YOU HAVE TO GET UP PRETTY EARLY IN THE AFTERNOON TO BEAT ME OUT ON THE WATER"
He does however live up to his name of the WALLEYE WIZARD.


email from
Just wanted to say thanks for a nice week. You seem to have found some
really good help this year in Carlos, Rene, and Ron.

Fishing was spotty but we did get on a good bite on Saturday night on the
hump in North Bay. My Dad landed a really fat 28" walleye and I had a big
northern (~42") hit my leech--got it to the boat but it broke off before we
could get her netted. Had a bunch of smaller walleyes as we drifted across
and down the back side of the hump. It was nice to get on a spot that kept
producing fish.

Hope the rest of the summer goes well for you. We'll probably try to come
back June 19-26 next year with a group of 4 to 6. Can you pencil us in for
a housekeeping cabin? 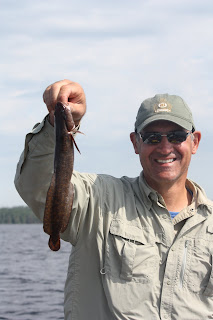 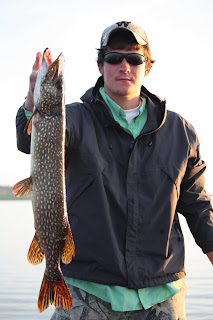 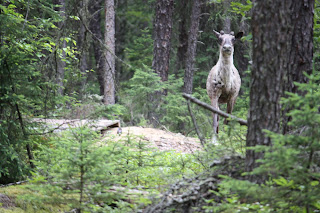 7/1
Early overcast with strong winds blowing from the east. 3 to 4 foot swells, pretty rough.
Chuck and Paul again went out with Dennis, caught some nice sizes and had a huge pike take a swipe at a walleye Paul was reeling in for a total of 187. "I KNOW THERE ARE BIG PIKE IN THE LAKE BUT WHEN YOU ACTUALLY SEE ONE RIGHT BY THE BOAT - WOW" -Paul Shubert

I WAS OUT WITH HAYDEN AND HIS GRANDPA
IN A LITTLE OVER AN HOUR WE CAUGHT OVER 30 IN 14-18 FEET OFF OF JACKS HUMP.
NOTHING BIG
DENNIS, PAUL AND CHARLES WERE RIGHT BESIDE US AND EVERYTIME I LOOKED CHARLES WAS PULLING IN ANOTHER WALLEYE.

David and Bradley brought in about 120 walleye, the largest at 23”. Bradley also caught a 32” pike by the sisters. They also spotted a wolf, caribou behind the dining hall and caught an eelpout(burbot).