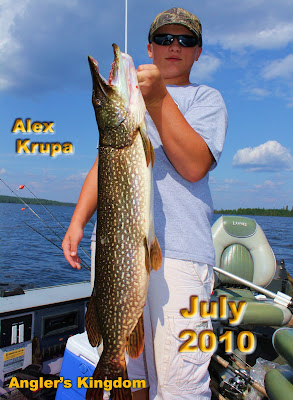 I fished with Al and Alex Krupa
I showed them a few spots to fish for the week.
Then stopped at Ferrit island
sat in 14 feet and cast jig and minnows up to the edge of the rock bar.
caught a bunch of walleye
the walleye quit biting
I saw the big pike on the graph
I suggested Alex get out his casting gear.
On his third or fourth cast bang a rather nice pike.

I took Deb and Seanna over to the back side of Wolf Island
We sat on a mud/sand bar coming off the island near the tip where it dropped
into 28 on the side and 22 off the tip
we sat in 14 foot
Had 4 pike grab walleye.
biggest one was in her mid 40s
lots of fun.
Would have stayed out longer but Belinda called and sold us on the Prime ribe dinner.
It was awesome, maybe even better than catching a few more big pike or walleye.
(did I actually say that?)

Bret Hodne and the guys are in camp
they said for a few hours they literally could not touch bottom with their jig and minnow or jig and worm. They were fishing 12-16 feet mostly in big bay and that area.
"probably about 800 for our group, today"

Domonic Cosgrove said they caught hundreds all around the mid lake basin, biggest was 26.5

Tom Chaladak and his son did very well yesterday with their first walleye being 25 1/2 but were a little off today. I'm sure they will do well tommorrow.


I didn't get a chance to talk with Roger Hagan and his son and friends this evening but they've been here before and I'm sure they did quite well.
I'll check in the am and update this.
Posted by Kevin Geary at 8:24 PM

Email ThisBlogThis!Share to TwitterShare to FacebookShare to Pinterest
Labels: krupa